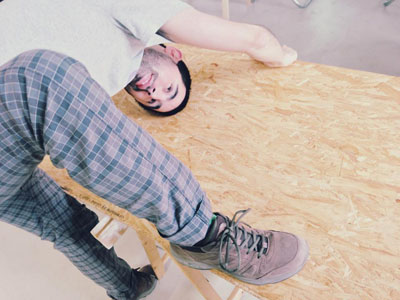 I’ve been working with Google on Tilt Brush, a VR app to draw intuitively in 3D space. I made lots of prototypes and was in charge of creating an open source toolset to import users' sketches into the Unity game engine.

The tools I made let creators easily use their art in new ways, with examples on how to make animations, interactive stories, music-driven sequences and games.

I’m working on a hand-drawn animation tool inside of Unity about making work fun, engaging and easy, removing technical barriers and achieving flow when creating games. Inspired by WarioWare DIY and flickgame.org.

I did a week-long freeform residency at the Champlain College in Burlington, VT, where I set up an immersive bouncy-castle solo show with 8 projections and 3 interactive pieces featuring fluffy controllers.

I also made a VR experiment about negative-sculpting: carving walls like clay. It explores how it feels and what it means to sculpt the space surrounding you and stepping to the other side to reveal the opposite space.

My biggest project is a collection of interactive landscapes with analog controls, for PC and Mac. I collaborated with multiple artists and even had custom controllers built for it.

I grew up in Argentina, lived in Buenos Aires, Mexico, Berlin and Portland, OR while working on independent projects and currently live with my partner Kevin in New York City.